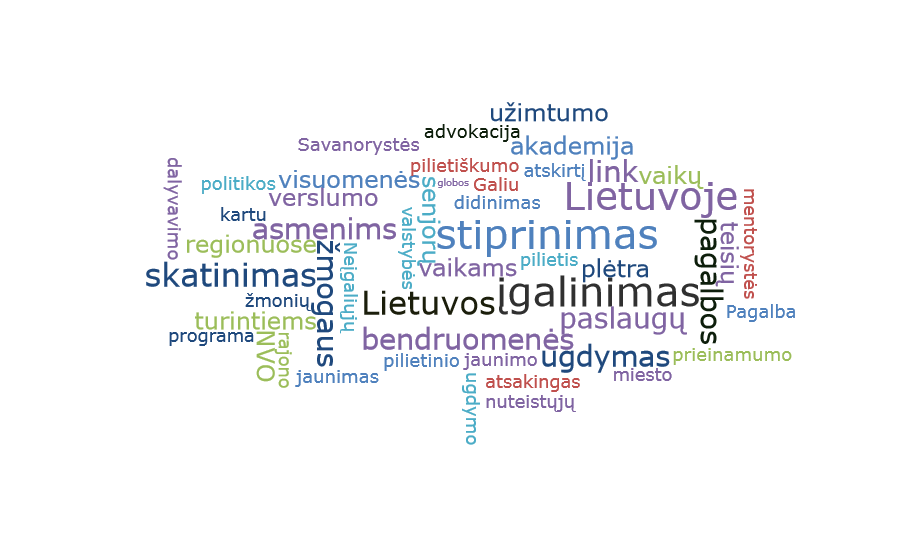 157 applications were received for the Active Citizens Fund programme, following the deadline of 30 September 2021 for the submission of a project concept.

The APF programme in Lithuania aims to have the following impact:

Projects are divided into two types according to the size of the funding and the duration of the project, namely small-scale projects and medium-scale projects. Small projects have a funding size of between EUR 5 and 15 thousand and 25 applications (16%) were received in this group according to the size of funding. Medium-sized projects have a funding size of more than EUR 15,000 but not more than EUR 80,000, with 132 applications (84%).

The number of projects submitted by regional organisations (i.e. not from Vilnius municipality) amounts to 95 (61%).

The total amount of funding requested is €9,021,017, broken down by impact area as follows:

In terms of the most frequent use of words in the project title, the words “strengthening” and “empowering” were mentioned 10 times in the title, along with “Lithuania” and “Lithuania” and “promotion”.

After the formal criteria have been assessed, the applications will be submitted to a panel of experts (20 specialists in their field). In the second half of November, the Selection Committee, after discussing the experts’ evaluations and the ranked lists of projects based on them, will recommend project concepts for the second round of full applications.

The objectives of the Active Citizens Fund (ACF) are based on the following common values: respect for human dignity, freedom, democracy, equality, the rule of law and respect for human rights, including the rights of persons belonging to minorities. The overarching goal of the APF programme is a strong and vibrant civil society and the empowerment of vulnerable groups.